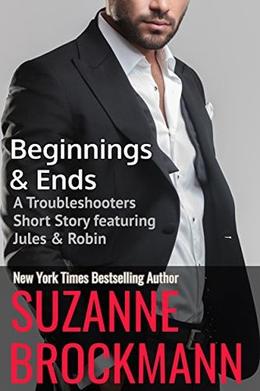 BEGINNINGS AND ENDS: Annotated reissue originally e-published in June 2012
A Troubleshooters short story
Jules and Robin find that endings can be the start of something new…

After years of playing a tormented actor named Joe Laughlin on the hit television show Shadowland, Hollywood star Robin Chadwick Cassidy is ready for a change. Joe’s character embodies the real demons of Robin’s past—his struggle with his sexuality, his battle with alcoholism—and portraying the part has taken a heavy toll on his personal life. Robin’s husband, FBI agent Jules Cassidy, has noticed the strain and will do whatever he can to make Robin happy. And what Robin has in mind will forever transform his career, his marriage, and his family. (Around 12K words or 60 pages)

Also available in a low priced 3-in-1 collection, in both ebook and print, with WHEN TONY MET ADAM and MURPHY'S LAW.
more
Amazon Other stores
Bookmark  Rate:

'Beginnings and Ends : A Troubleshooters Short Story' is tagged as:

Similar books to 'Beginnings and Ends : A Troubleshooters Short Story'

Buy 'Beginnings and Ends : A Troubleshooters Short Story' from the following stores: