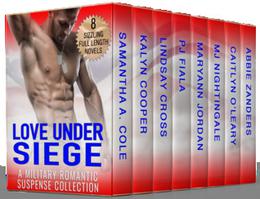 Eight Sizzling Full-Length Novels featuring Military Heroes by acclaimed authors who know how to bring the Heat, Action and Suspense!

Tuff Enough by Samantha A. Cole
While security operative Jason “Tuff” Tanner lives for dangerous assignments, he likes his downtime in his quiet neighborhood too. But that peacefulness is suddenly interrupted when his new next-door neighbor becomes a target for someone hell bent on revenge. Canine rescuer Concetta “Chet” Suarez brings all his protective instincts to the surface, along with feelings he’s never experienced with any other woman. Will he lose her before he ever gets a chance to make her his?

Never Forget by KaLyn Cooper
Dreams or nightmares. Truth or lies. He can’t tell them apart after he sees the woman in his dreams. She is the key to his past, present, and future… She just buried her husband next to her fiancé who was killed in an explosion while they were on a mission together ten years ago. She doesn’t need another man in her life, until someone tries to kill her.

Ravished River by Lindsay Cross
Special Forces Operative Aaron Spears dealt with relationships like he dealt with battle – something to be avoided if at all possible, until Celine Latimer walked into his life and turned his world upside down.

Lincoln by PJ Fiala
Lincoln Winter is hired to bring in a criminal who is selling arms on the black market and he never misses a mark. That is until the sultry Skye Sommers crosses his path and unwittingly gets herself caught up in much more than she can handle. Can they stay alive long enough to find a killer, an arms dealer and love?

Mace by Maryann Jordan
Mace Hanna’s security business keeps him busy…too busy for a relationship. When providing security for a single mom and her young son who has witnessed a murder, he vows to keep them safe...and finds love along the way.

Black Jack by MJ Nightingale
Undercover FBI agent, Jackson Black doesn't expect to find love while working deep undercover on a RICO case. But he can't resist Dawn, the sexy accountant, who keeps crossing his path during the investigation putting both of their lives on the line.

Her Guarded Hero by Caitlyn O’Leary
It’s been five years since his tragic loss and Navy SEAL, Dalton Sullivan heads to Lake Tahoe to be alone. The last thing he expects is horse trainer, Aurora Chance to literally fall at his feet. As danger and raw emotion churn around them, can Dalton be brought back into the light?

Not Quite Broken by Abbie Zanders
Former POW Brian McCain is so busy fighting his demons, there’s not enough left over for anyone else – not even the one woman who has a way of shining light into his darkness. But when a serial killer turns his sights on her, Brian realizes he’s not quite as broken as he thinks he is.

Love Under Siege will only be available for a limited time, grab your copy now before it's gone forever!
more
Amazon Other stores
Bookmark Rate Book

Recent books by Samantha A. Cole

All books by Samantha A. Cole  ❯