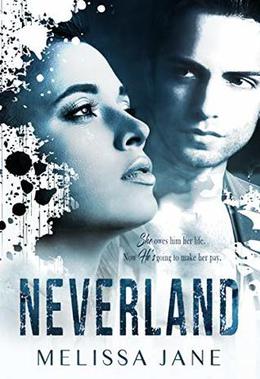 On a fateful, stormy night, a ghost from the past revealed himself under the glow of a street lamp. A ghost whose smile was as cold and dangerous as his heart.

He remembered her well.
She was the one everyone talked about. The poor girl down the street born into a family of monsters. The one he’d obsessed over, taunted and harassed. The very same girl who’d one day suddenly disappeared.

Accepting his hand, he lifted her off the dirty, vile street and whispered a promise, “No good deed comes without payment,” and from that day on, she was destined to pay the ultimate price.

Seeing her for the first time since she’d vanished all those years ago, had only made him realize his obsession never truly ended. And now, with a promise to keep, he was going to make her disappear again… this time forever.

Dear Readers,
While NEVERLAND contains some romance, it is also a tale of twisted obsession. It certainly is NOT a hearts and flowers type story, and WILL contain triggers for some readers as it deals with particularly confronting situations. I ask that you take this into consideration before you dive in. This cruel, yet touching narrative, with its mix of adoring and sinister characters who exist in its broken world, was at times extremely difficult for me to write, and as each scene unfolds, I expect it will be equally as difficult for 'some' to read and accept.
I do, however, thank you for reading NEVERLAND!

'NEVERLAND' is tagged as:

All books by Melissa Jane  ❯

Buy 'NEVERLAND' from the following stores: