Where the Hell is Tesla? 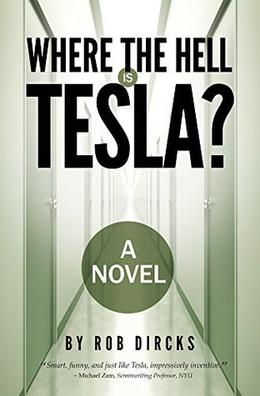 I'll let Chip, the main character tell you more: "I found the journal at work. Well, I don't know if you'd call it work, but that's where I found it. It's the lost journal of Nikola Tesla, one of the greatest inventors and visionaries ever. Before he died in 1943, he kept a notebook filled with spectacular claims and outrageous plans. One of these plans was for an "Interdimensional Transfer Apparatus" - that allowed someone (in this case me and my friend Pete) to travel to other versions of the infinite possibilities around us. Crazy, right? But that's just where the crazy starts."

CHIP'S OFFICIAL DISCLAIMER: This is a work of fiction: the events depicted in the collection of emails did not happen. I have never been in contact with a covert government group attempting to suppress knowledge of the lost journal of Nikola Tesla. I have not been threatened with death if I divulge the secrets contained inside. They did not buy me this handsome jacket (oh crap, you're reading this - trust me, it looks great on me). They did not come to my place, and liquor me up, and offer to publish this book as a sci-fi comedy novel to throw the public off the trail of the real truth.

I'm kidding. Of course they didn't.

'Where the Hell is Tesla?' is tagged as:

Similar books to 'Where the Hell is Tesla?'

More books like 'Where the Hell is Tesla?'   ❯

Buy 'Where the Hell is Tesla?' from the following stores: