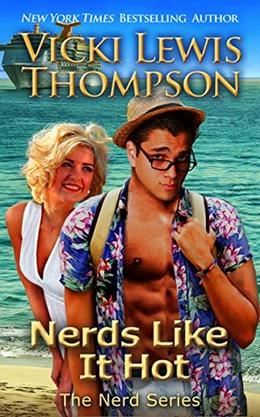 A rollicking nerd romance from the New York Times bestselling author who brought you Nerd in Shining Armor!

A cruise for single nerds hits a little too close to home for P.I. Lex Manchester, but he can’t say no when curvaceous makeup artist Gillian McCormick becomes the sole witness to a murder and is on the run from the killer. The plan? Hop onto a cruise ship bound for Mexico with Gillian disguised as a Marilyn Monroe look-alike and Lex as her nerdy, undercover bodyguard.

But their safe haven becomes a prison as mysterious accidents convince Lex that someone else is in disguise and onboard – the man who wants Gillian dead. Lex is determined to protect her, but he didn’t count on his heart becoming part of the equation, placing him in a no-win scenario. Whether he succeeds or fails, the ship will eventually dock...and he’ll lose her forever.

This is a stand-alone book in Vicki Lewis Thompson's bestselling Nerd Series. If you like laugh-out-loud adventures and romance where the nerd gets the girl, you'll love Nerds Like It Hot.

Books in this series can be read in any order. The series includes:
Nerd in Shining Armor (Book 1)
The Nerd Who Loved Me (Book 2)
Nerd Gone Wild (Book 3)
Gone with the Nerd (Book 4)
Talk Nerd to Me (Book 5)
Nerds Like It Hot (Book 6)
My Nerdy Valentine (Book 7)
Nerds Are From Mars (Book 8)

Nerds Like It Hot was originally published in 2006 by St. Martin's Press
more
Amazon Other stores
Bookmark  Rate:

Buy 'Nerds Like It Hot' from the following stores: