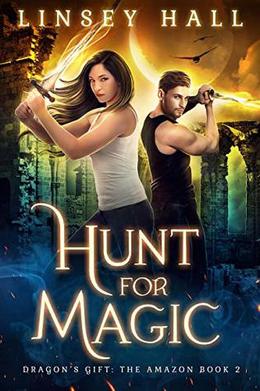 Winning might be impossible, but damned if I won’t try.

Against all odds, I’ve won the chance to represent my academy at the Intermagic Games. Teams from all over the world will compete.

But it’s not just the prize I’m after--I’m going undercover to stop two ancient evil monsters. They’ve infiltrated the games, and if they get their claws on the prize first, all hell will break loose.

When I’m paired up with the irresistibly sexy gladiator Maximus, it will take all my skill to keep my eye on the goal. And I have to do it while keeping my dark magic under wraps. Because if the judges realize what I really am, it’s a one way trip to the Prison for Magical Miscreants.

Hunt for Magic is a fast-paced urban fantasy adventure starring a kick butt heroine, a powerful hero, and magic that will rock your world.
more
Amazon Other stores
Bookmark  Rate:

'Hunt for Magic' is tagged as:

Similar books to 'Hunt for Magic'

All books by Linsey Hall  ❯

Buy 'Hunt for Magic' from the following stores: