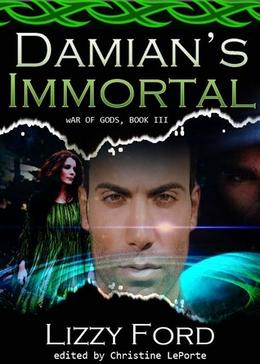 The White God’s most trusted friend, Jule, has his powers stripped by the Watchers. They give him an impossible mission: find the mysterious Magician and kill her, before she reopens the gateway between the realms. Jule quickly discovers the beautiful Magician is not what the Watchers claim. Afraid of her own powers, the Magician has lived a sheltered life, a near-prisoner of someone determined to use her magic to destroy the human world. The Magician, Yully, must choose between her loyalty to the man she views as her father and Jule, the man whose touch brings her hope and happiness after years of fear.

Meanwhile, the young Black God is growing into his powers, with the assistance of a being that shouldn’t exist, and whose presence threatens to alter the balance of power between Good and Evil.
more
Amazon Other stores
Bookmark  Rate:

'Damian's Immortal' is tagged as:

All books by Lizzy Ford  ❯