Ewan (The Sword and the Spirit #1) 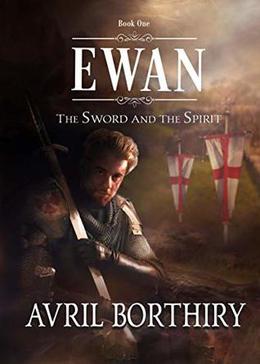 An exciting new historical-romance series that follows the fates of three Templar knights after the countrywide arrest of their brethren that took place in France on Friday 13th October, 1307.
Forewarned of the French king’s shocking edict, Ewan, Gabriel and Jacques, along with a young squire, escape to Scotland and specifically, Ewan’s ancestral home.
A remote bastion, situated in the coastal Highlands, Castle Cathan is a place long affiliated with the Templars. But it is a secular domain, not beholden to the strict rules that dictate a Templar’s life. Each knight, then, must struggle to maintain his disciplined lifestyle and keep his faith. Not easy, when the way ahead is uncertain and the mighty Templar order is on the brink of collapse.
Book One. Ewan.
It is not enough that Ewan MacKellar has been exiled and forced to flee to his family home. When tragedy strikes soon after his return, he is also forced to surrender his beloved white mantle, discard his holy vows, and assume another role.
He now faces a conflict of loyalties, a battle he struggles to resolve as he finds himself falling in love. But misplaced greed forces a betrayal, one that all but breaks Ewan’s heart. Yet, from the guilt of that betrayal comes a remarkable act of courage and an astonishing turn of events that can only be described as miraculous.

Will Ewan at last find his destiny? And what of Gabriel and Jacques, his Templar brothers-in-arms? As Ewan’s story winds to a close, it becomes clear that theirs is only just beginning.
more
Amazon Other stores
Bookmark  Rate:

'Ewan' is tagged as:

The 'The Sword and the Spirit' series

Gabriel
Gabriel
(The Sword and the Spirit #2)

Buy 'Ewan' from the following stores: