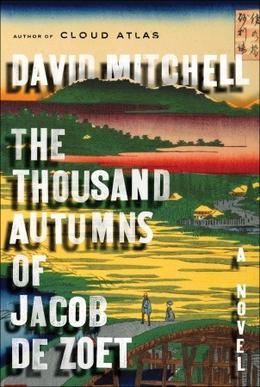 Japan, 1799; Jacob de Zoet arrives on Dejima in Nagasaki harbour. For over 150 years this artificial island, manned by the Dutch East India Company, has been the only point of contact between Japan and Europe. The foreign traders are forbidden to leave the island whilst the Japanese may not travel beyond their native land. Yet through the porthole of Dejima the new learning of the Enlightenment seeps into the Shogun’s cloistered realm while tales of a mysterious land seep out.

As a junior clerk, de Zoet’s task is to uncover evidence of the previous Chief Resident’s malpractice. Ostracised by his compatriots, he befriends a local interpreter and becomes drawn to one of the few women on the island, a midwife with a scarred face who is granted permission to study under the Company physician. But in the battles for supremacy on Dejima and the mainland, and between the Dutch and British on the high seas, trust is betrayed and loyalties are tested to breaking point.

At once a love story, an adventure, a study of power and corruption, and a glimpse into a hidden world, The Thousand Autumns of Jacob de Zoet brings to vivid life the ordinary - and extraordinary - people caught up in a tectonic shift between East and West. It is an historical novel unlike any other from one of the brightest talents writing in the English language.
more
Bookmark Rate Book
Amazon Other stores

Similar books to 'The Thousand Autumns of Jacob De Zoet'

Buy 'The Thousand Autumns of Jacob De Zoet' from the following stores: