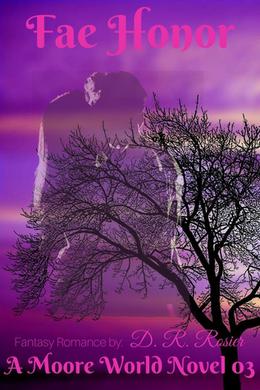 Kyle Moore, the son of Shawn Moore and Krystal, has been living at home for almost his whole life. He had no choice, until he could use glamour properly to avoid being seen as fae by the humans around him, he couldn't risk exposure. He's gotten a hold of his magic, and has plans to visit his nephew and niece in Paradise. But… he keeps putting it off. The idea of meeting the only other fae on the planet with a conscience is a bit overwhelming, after all, what if they hate each other?

Lavender is an outcast among outcasts, and still wonders why Portia spared her life in the first place and brought her to her new home. She could count the number of friends she had with the fingers of one hand, and wasn't at all sure she deserved to have them. Why had Portia spared her, when she had done so many horrible things before she'd been forced to give herself a conscience, and the ability to judge good and evil.
She believes herself to be a monster, and she struggles to make up for a past that is unforgivable. A sea of change is coming, not just in Lavender's personal life, but in something that very well might rock the fae world to its foundations.

Mature Content Warning! This book is a fantasy romance, and contains some mature scenes between a man and a woman. Less than usual for those that read my books.

Similar books to 'A Fae's Honor'

All books by D.R. Rosier  ❯

Buy 'A Fae's Honor' from the following stores: