KINCAIDE AND THE NANNY (Western Embrace #1) 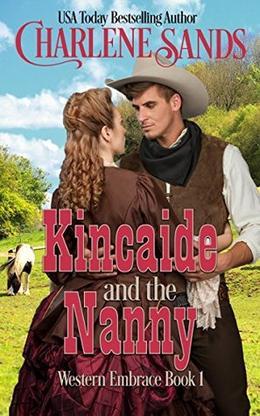 LILY HAD A SECRET
Rancher Tyler Kincaide never wanted to marry again, but his unruly young daughter needed female guidance and proper Miss Lillian Brody seemed the good and logical choice. He offered the tall, awkward woman a home and marriage and much to his surprise, she refused.
Lily, the spinster of Sweet Springs, Texas was infatuated with handsome widower Tyler Kincaide. Each time the man came near her tongue tied and her nerves jumbled. With her mercantile failing and her funds diminished, Lily was desperate for a miracle, but Tyler’s out-of-the-blue marriage proposal was certainly not it. He’d offered her his home but not his heart and Lily needed more than a loveless marriage. Instead, she suggested something different, something that made sense, leaving Tyler no choice.
Lillian Brody was Tyler’s new hire, a woman under his roof without benefit of marriage. She wasn’t too hard to ignore…until Lily began to blossom right before his eyes.
more
Amazon Other stores
Bookmark  Rate:

'KINCAIDE AND THE NANNY' is tagged as:

Similar books to 'KINCAIDE AND THE NANNY'

Buy 'KINCAIDE AND THE NANNY' from the following stores: