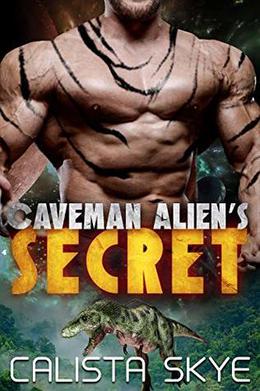 Delyah
This caveman has abducted me.
A moment ago, I was pointing my crossbow at his striking, alien face.
Then he grabbed me and ran.
He's seven feet tall, has huge muscles and deep black stripes.
And I know that the bulge in his loincloth hides something very alien and special.
He makes me tingle like crazy.
But I can't just follow my instincts.
The cavemen here on jurassic planet Xren have no women of their own. So they like to abduct Earth girls.
And then they impregnate them.
I vowed that would never be me.
And it won't.
I still have my crossbow. I will kill if I have to.

Brax’tan
It's a woman!
I didn’t know they would be so soft and small and... enticing .
Her roundness is luxurious. There is a mysterious fire in her dark eyes.
She’s spectacular.
Her whole being calls to me. My crotch swells at the mere sight of her.
She resists me. I will let her.
And when the time is right, I'll rip her ridiculous weapon from her hands and do with her as I please.
It will be a true joy.

Caveman Alien's Secret is the sixth book in the Caveman Aliens series of science fiction romance novels. The books are complete stories, but should be read in order for maximum enjoyment.

Expect steamy scenes, mysterious aliens with features like adult toys, deadly planets and the love story between a curvy girl from Earth and a sensationally hot alien warrior.

Full-length romance novel with no cliffhangers and a happy-ever-after ending!

'Caveman Alien's Secret' is tagged as: