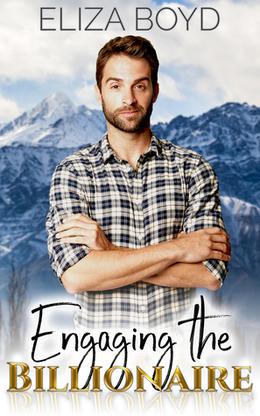 Most of the time, lying is bad. But sometimes, lies lead you to the love of your life.

Evan Charleston is desperate to get his daughter into the private school of her dreams. He needs to follow their family-oriented rules, so he might have led them to believe he was engaged. Unfortunately, after his ex left him and their child, he hasn't had anyone special in his life. But when he accidentally knocks over a waitress's tray of drinks and gets her fired, he concocts a ridiculous but perfect plan to pay her back.

Nicole Ballinger has had a string of bad days. But nothing takes the cake like getting fired while soaked in alcohol. When the man who cost her her job offers her the opportunity of a lifetime, she knows she can't pass it up. Her father's health depends on it. He only has one rule: that his daughter doesn't get involved. She's sure she can handle that. What she can't seem to handle, however, are her growing feelings for the man she agreed to fake an engagement with.

A woman desperate to take care of her father.
A billionaire in need of a wife.
And a deal neither of them can refuse.
When it starts to feel all too real, will Evan and Nicole stick to their deal? Or will the truth come out while she's (fake) engaging the billionaire?

'Engaging the Billionaire' is tagged as:

Similar books to 'Engaging the Billionaire'

Buy 'Engaging the Billionaire' from the following stores: