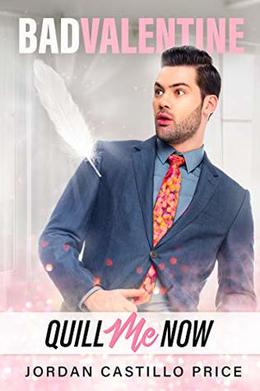 What if the words you wrote came true?


Spellcraft isn’t exactly a respectable business, but it does pay the bills. At least, it should. Unfortunately, Dixon Penn failed his Spellcraft initiation. Instead of working in his family’s shop, he’s stuck delivering takeout orders in his uncle’s beat-up Buick.

Winning a Valentine’s Day contest at the largest greeting card company in the tri-state area would be just the thing to get his life back on track—but something at Precious Greetings just doesn’t add up. And despite numerous warnings to quit pestering them about his contest entry, he just can’t stop himself from coming back again and again.

It doesn’t hurt that the head of security is such a hottie. If Dixon had any common sense, he’d be scared of the big, mysterious, tattooed Russian.

To be fair, no one ever accused him of being too smart….


Quill Me Now is part of the lighthearted Bad Valentine collection, along with Love Magic by Jesi Lea Ryan, Hidden Hearts by Clare London, and Temporary Dad by Dev Bentham.
more
Amazon Other stores
Bookmark  Rate:

'Quill Me Now' is tagged as:

Similar books to 'Quill Me Now'

Buy 'Quill Me Now' from the following stores: