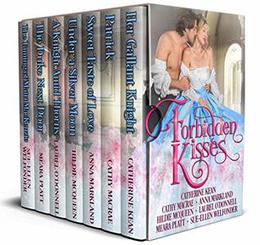 Join your favorite USA Today, Bestselling and award-winning historical romance authors, as they spirit you away into an age of adventure and romance. This set includes –

Her Gallant Knight by CATHERINE KEAN –
A humiliating childhood incident made Lady Amelia Bainbridge vow to avoid Lord Ryder Stanbury. Yet, years later, Ryder comes to her rescue. Shocked to recognize her ring, he realizes she’s connected somehow to the Templar treasure he and fellow knights brought back to England—riches that not only bring him and Amelia a second chance at love but perilous secrets.


Patrick by CATHY MACRAE –
One ghost from Culloden’s moor fears he will never be counted among the brave—until a wee witch leads him deep into the past and makes him question what he believes about himself and the world around him. Will Patrick take a chance on real bravery?


Sweet Taste of Love by ANNA MARKLAND –
Bound by guilt, freed by love.
Aidan FitzRam joins the monastic community at Lindisfarne to atone for what he perceives as his role in his parents' drowning. But he quickly realizes he cannot ignore the plight of Nolana Kincade, a Highland lass who is fleeing an abusive step-father. Their growing attraction to each other bears out the reality his sister has always maintained—he's just not cut out for the religious life.


Under a Silver Moon by HILDIE MCQUEEN –
Lucas McKade and Camille Johnston, attempt to leave their pasts behind, only to find true happiness, comes only when they face it.

When US Marshal Lucas McKade, new deputy of Silver City, Idaho decided to settle down, he didn't consider the complications he’d bring to the town. Against every instinct Lucas seeks out apothecary owner Camille, a woman who calls to his basic nature to protect and make his.

Camille Johnston knows that eventually the secrets of her past will come to haunt. Yet she hopes to keep things hidden as long as possible and enjoy her lonely but peaceful existence in Silver City. A handsome new deputy brings with him desires she'd thought were firmly shut away, however, a relationship of any kind would only bring dangerous consequences.

The shadows of the past fall over a man and a woman attempting to start anew.


A Knight Amid Thorns by LAUREL O’DONNELL –
When the murderer of her brother is welcomed into her castle as a friend, Lady Ella Rames vows to make his life as miserable as hers and to avenge her brother. Struggling to fulfill an oath and find the elusive blue rose, Sir Graden Dumount’s final hope rests with a woman who despises him. Can Ella and Graden overcome their animosity and let the power of the blue rose heal them and turn enemies into lovers?


The Duke Next Door by MEARA PLATT –
Lady Mallory Goodell has always loved her neighbor, Lucien Hawthorn, the handsome Duke of Hawthorn, but knows that marriage to him is a hopeless dream. Lucien needs an heiress and the hefty dowry she'll bring in order to rescue the ducal estate his father left in shambles. But what harm can there be in sharing a forbidden kiss with Lucien?


The Taming of Mairi MacKenzie by SUE-ELLEN WELFONDER –
A battle-weary champion must break his vow never to fight again – or lose the only woman capable of healing his warrior’s heart.