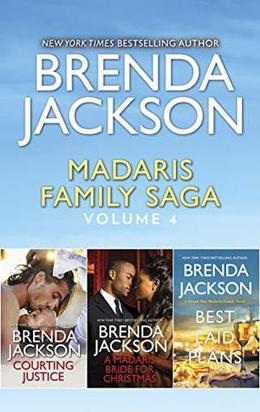 The Madaris men are about to meet their destinies… Don’t miss a single reader-beloved story in this unforgettable collection from New York Times bestselling author Brenda Jackson.

Winning a high-profile case has given a huge boost to New York attorney DeAngelo Di Meglio’s career—and his love life. Too bad fame hasn’t helped him win the woman he’s been infatuated with for years. Tired of waiting and wondering, Angelo books a trip to the singles-only Bahamas resort where Peyton Mahoney is celebrating her thirtieth birthday. And just as he hoped, when they finally connect, the chemistry is mind-blowing….

Two weeks in paradise has given Peyton some sizzling memories. That’s all she expects—or wants—from a legendary player like Angelo. Having grown up on Chicago’s South Side, she is worlds away from his life of privilege. Then a controversial case puts them on opposing sides. And as sexual tension spills over from the courtroom to the bedroom, there’s no way they can ignore the undeniable attraction….

A Madaris Bride for Christmas

One by one, Madaris men have surrendered to the matchmaking schemes of Felicia Laverne Madaris, matriarch of the family. But Lee Madaris isn’t letting anyone else control his destiny. He’ll bring a bride of his own choosing to the family’s holiday gathering—if his hotel’s gorgeous new chef will agree to a marriage of convenience.

It’s not just the chance to work at the Strip’s hottest hotel that brought Carly Briggs to Vegas. Witnessing a crime in Miami may have made her a mob target. Though she’s reluctant to complicate their working relationship, Lee’s tempting offer is so hard to resist. And soon, desire is clouding their no-strings arrangement. But the danger that made Carly flee Miami is about to land at their door. Carly and Lee must decide who to trust, when to let go—and whether a love they never anticipated is strong enough to pass the ultimate test.

Even a famed matchmaker like Nolan Madaris’s great-grandmother can’t get it right every time. Nolan, the notorious fun-loving ladies’ man, could never connect with someone as straitlaced as tech whiz Ivy Chapman. Yet the scheme Ivy proposes is tempting—they can pretend to be a couple, just long enough to satisfy their families.

What happens, though, when Ivy’s plan to get her relatives off her back has an unexpected side effect: getting her into Nolan’s bed? Houston’s number one womanizer may have found the only one who can truly satisfy him, body and soul. But with a man from Ivy’s past determined to be part of her future, both she and Nolan will have to decide what’s fake, what’s real and what’s worth fighting for…

'Madaris Family Saga Volume 4: An Anthology' is tagged as:

All books by Brenda Jackson  ❯