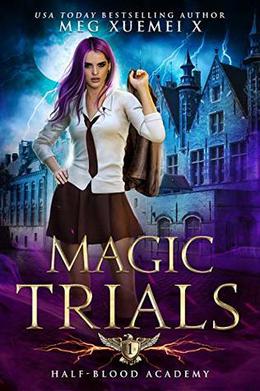 The demigods can't decide if they want to screw me or kill me.
My name is Marigold. I'm a hunter living in the Great Merge--Lucifer has brought Hell to half of Earth, and four demigods rule the other half.
The smoking-hot Demigod of War round up my team to enroll them in Half-blood Academy, aka Half-death Academy, due to the survival rate of the students.

When he sees me, he wants no one else but me. So he offers to spare my team if I go in their place. Problem is, no human outside the bloodline of the gods can survive the magic trials. The demigod insists I'm anything but human, and he's willing to risk my life to find out what I'm made of.

I'm not the weakest link, even though all the bullies in the Academy mock me. I'm nothing anyone has ever seen before, and when my forbidden power awakens, the demigods will regret they ever tried to make me their bitch.