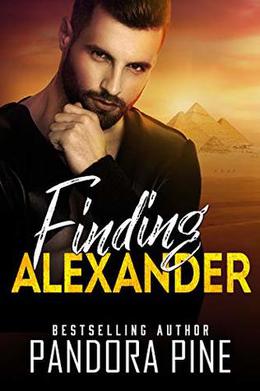 Archaeologist Cairo Vanderbilt was born to be a treasure hunter, whether he liked it or not. When his famous father dies in search of the tomb of Alexander the Great, Cairo picks up the trail to find the world's most famous lost treasure. Having failed once before, he's determined to find Alexander’s remains and fulfill his family's legacy.

History blogger Dillinger DeCosta has only written about the past from the safety of his South Boston office. After hearing Cairo speak about the coming expedition on the evening news, he
wants to join the hunt for Alexander and finally be on the front lines of history-in-the-making. By offering to come along, Dillinger is taking a huge risk, but he's banking on an even bigger reward.

Hot on Alexander’s trail, Cairo and Dillinger discover sparks between them that ignite unexpectedly. One of the men has a secret that may threaten not only the success of the expedition, but their new relationship as well. If they can't find a way past the challenge that lies between them, they might just lose the greatest treasure of all.

Each other.
more
Amazon Other stores
Bookmark  Rate:

'Finding Alexander' is tagged as: