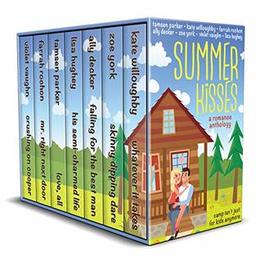 Welcome to Camp Firefly Falls, where camp isn't just for kids anymore. We hope you love the seven stories we've put in this collection by NY Times, USA Today and Bestselling authors of contemporary romance. Camp Firefly Falls is a fictional sleepaway camp for grownups, set in the Berkshires. It's a special place where adults get away from their usual lives and find more than a relaxing vacation. They find love. Please enjoy camp, adult style!

Mr. Right Next Door - Farrah Rochon
When Leah Cross's fiancé decides he no longer wants to get married, the hardworking finance analyst is determined to attend the couple's retreat at Camp Firefly Falls anyway. But after being dumped, the humiliation of showing up alone is too much for Leah to bear. She needs a stand-in ASAP. At the top of her list: her hot next-door neighbor, Caleb Scott.

Falling for the Best Man - Ally Decker
Opposites attract... but are they really all that different?
Among the last-minute wedding preparations and to the tune of Broadway's greatest hits, two men fall head-first into a kind of summer romance they could only dream of as kids. But as they become each other's plus one for the wedding, can they also become something more?

His Semi-Charmed Life - Lisa Hughey
After going from princess to pauper, Penelope Hastings grabs at the chance to work at Camp Firefly Falls--home of her most treasured memories. Rags to riches entrepreneur, Diego Ramos, never wanted to return to camp--site of his most hated teenage year and most regrettable moment. When they unexpectedly reunite, can they work through their issues to learn that love is the greatest fortune of all?

Love, All - Tamsen Parker
Nate Carter is taking a break from his engineering job to be Camp Firefly Falls' tennis instructor. There he meets Ruby Hudson, a struggling single mom who doesn't have time for Nate no matter how sexy his forearms are. The end of the summer is approaching and Nate is ready to put his heart on the line, but Ruby may not be ready to give him a real shot. After all, in tennis, love means nothing.

Whatever It Takes - Kate Willoughby
When Jane Merrifield signs up for the Grease-themed week at Camp Firefly Falls, she expects campfire sing-alongs, pajama parties, and hand-jive contests. What she doesn't expect is to come face to face with the guy who broke her heart when she was seventeen. But there's no way she's giving Booth a second chance, not even when it's clear he's still hopelessly devoted to her.

Skinny Dipping Dare - Zoe York
Navy SEAL Wyatt Henderson had signed up for a guys-only week of fishing and hiking and beer at his buddy's favourite camp in the Berkshires. Nobody said anything about campfire songs and kitchen duty and crafts at noon. Retro Throwback Week at Camp Firefly Falls is almost enough to drive him around the bend, and that's before the beautiful hippie in the girls' cabin next door decides he's no fun.

Crushing on Cooper - Violet Vaughn
Single mom Allison Nelson takes a job at Camp Firefly Falls as a baker for the summer, and it's a trip down memory lane. Not only did she attend the camp as a kid, but when a corporate retreat arrives she stumbles on Cooper Marshall, her first love. But her casual summer fling doesn't go as planned, and once she falls for Cooper again she struggles to reveal she's not the sweet innocent Ally he remembers. Cooper's not the boy he was either, and they each have to learn to take a chance on love.
more
Amazon Other stores
Bookmark  Rate:

'Summer Kisses - A Contemporary Romance Collection' is tagged as: