Curse of the Dragon (Immortally Cursed #2) 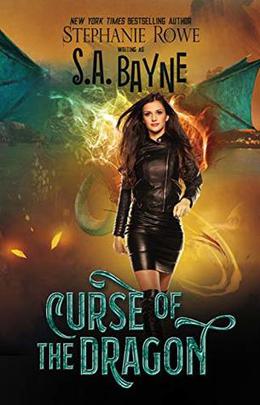 Can a sassy, fiery dragon and a smokin'-hot dragon slayer have a happily ever after?

Theresa Nichols is so over being stuck in dragon form. Two centuries of being trapped indoors because society can't handle a dragon is two centuries too many…especially when it means she's about to miss out on her one chance for love.

Desperation sends Theresa to make a deal with her reluctant bestie's boss, who happens to be the leader of hell. Totally worth risking your eternal soul to get your life back, right?

Except once Theresa goes human, everything falls apart. The dangerous badboy she's kinda falling for turns out to be an ex-dragon slayer, her ex-lover from a couple centuries ago is stalking her, and there's a team of active dragon slayers hunting her down.

When private detective and reformed dragon slayer Zeke Siccardi realizes that he's inadvertently set two sets of assassins on Theresa's tail, he's determined to make it right, no matter how badly she wants him out of her life.

There's no chance for a dragon and a dragon slayer to make a relationship work, right? But when the stakes involve murder, eternal love, and the safety of the Goblet of Eternal Youth, not to mention the fate of dragons everywhere, Theresa and Zeke can't afford not to team up. But will their deadly attraction destroy them before they can save Theresa's life and Zeke's soul? It might…but it's so hot between them that it might almost be worth it.

About the Author: S.A. Bayne is a gift to the universe, at least according to her dogs, and everyone knows dogs are world-class judges of people. She was taught to play by the rules, but after suffering numerous apoplectic breakdowns, she realized that she had to ditch the rules, figure out her own way to live, and then turn that into a high-octane, irreverent, unpredictable-as-hell, paranormal romance that will make your day so much better just by reading it. For more info on SAB, check out www.sabayne.com , which is chock full of good stuff. And yes, she is also New York Times and USA Today bestselling author Stephanie Rowe, winner of the 2018 RITA® Award for Best Paranormal Romance. Because she's nifty like that.
more
Amazon Other stores
Bookmark  Rate:

'Curse of the Dragon' is tagged as:

Similar books to 'Curse of the Dragon'

Buy 'Curse of the Dragon' from the following stores: