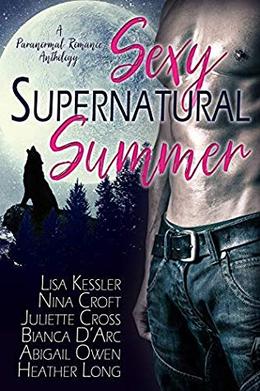 Sexy Supernatural Summer is a boxed set of short stories from six of the hottest paranormal romance authors out there.

Warning: Sexy Supernatural Summer contains alpha heroes, sassy heroines, sizzling connections, wicked intentions, heart-racing suspense, and a little something naughty (but not too naughty) . And it's our gift to you...

STORIES IN THIS ANTHOLOGY
Lure of Obsession by Lisa Kessler:
Detective Nate Malone has been marked by the gods to protect the Muse of Tragic Poetry. When a killer sets his sights on her, Nate will risk everything to protect her, and tragedy isn't part of his plan...

The Prophecy by Nina Croft:
Whoever sacrifices the virgin, Raven Cole, on her twenty-first birthday will achieve a great victory in the war between good and evil.

That’s bad news for Raven. Half-vampire, half witch, and cursed from the moment she was born, Raven has been a prisoner of the fire-demons for the last seven years. Now, as her twenty-first birthday approaches, time is running out. Kael Hunter believed he would do anything to stop the fire-demons from winning. Until he saw her. Now, rather than kill the alluring vampire himself, Kael has another plan: to prevent the prophecy by taking Raven's virginity. But Raven is prepared for death, not seduction.

Soulfire by Juliette Cross:
Jessen Cade is the daughter of the wealthiest human family in Gladium. As corporate king, her father arranges a marriage to a man she detests, solely to increase the Cade empire. Feeling trapped by family duty and a loveless future, she longs for more, straying to the Morgon side of the city. Lucius Nightwing is the eldest son of the most powerful Morgon clan, the dragon hybrid race, and the greatest enemy of Jessen’s father. When a bar-room brawl thrusts Jessen into his arms, his dragon claws to the surface, craving to sate his carnal hunger in the brown-eyed beauty. The beast in Lucius recognizes her as his own, even if the man refuses to admit the truth. When star-crossed lovers succumb to burning desire, can love rise from the ashes, changing their world forever?

All About the Bear by Bianca D'Arc:
In the small, sleepy town of Grizzly Cove, Washington, all is not as it seems. Nell abruptly discovers that she and her sisters are the only humans in a town full of shifters – most of them bears! Knowing nothing about the paranormal creatures all around her, but wanting to know everything about the sexy sheriff who comes to her rescue, Nell has to find her backbone and brace herself to learn All About the Bear.

Her Demigod Complex by Abigail Owen:
As an ex-nymph, Lyleia Naiad has the unique ability to resist her boss's demigod-like charms. The man's been breaking hearts for millennia. But Castor Dioskouri shows her a different side--compassionate, dedicated, protective and loyal. And that Castor is nearly impossible to resist. Attending a werewolf mating ceremony together--where the pheromones fly, and so do clothes, inhibitions, and common sense--might be one temptation too many.

Wolf with Benefits by Heather Long:
Matt proposed pretending a relationship with his bestie Shiloh to help shield her from some of the pack’s disapproval and to get her out of her parents’ house. They were already best friends, so how hard could faking it be? Still, the closer they get and the more rules they break, the more Matt’s wolf wants to change their con game into a mating game.
more
Amazon Other stores
Bookmark  Rate:

'Sexy Supernatural Summer: A Paranormal Romance Anthology' is tagged as: