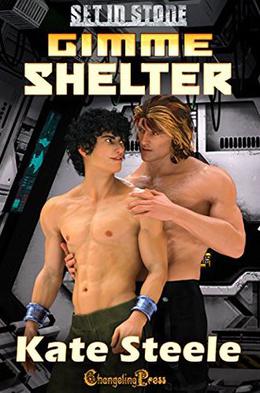 Captive of a violent warrior race, deliberately injured and set adrift to die alone in space, Shanrem De Nebral is rescued by Zen Ahbramez and the crew of the starship Brizo.

For Shanrem, raised to be nothing more than property to be sold to the highest bidder, the freedom, friendship and love he finds aboard the Brizo is more than he ever dreamed of. But even the best of dreams end, and for Shanrem there's nothing but trouble ahead.

With the near perfection bred into him in ruins, his own people would rather see him dead than returned and the Dukati warrior who owned him wants him back. To keep Shanrem safe and sheltered within his loving embrace, Zen's strength and resolve will be tested to the limits.
more
Amazon Other stores
Bookmark  Rate:

'Gimme Shelter' is tagged as:

The 'Set in Stone' series