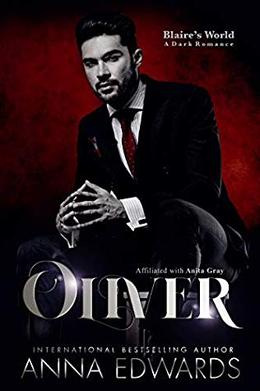 From Bestselling Author, Anna Edwards, comes a new Dark Romance that is part of BLAIRE’S WORLD. Anita Gray is proud to announce that Anna has written a BLAIRE original character!About OLIVER:My name is Oliver. I was a guard to Maksim Markov; king of the Russian underworld in Europe.I’ve seen things that would turn a cast iron stomach.I’ve stood by idly and watched endless acts of depravity.I’ve created hell on Earth in exchange for fortune.I’ve maimed, tortured, taken, and I’ve killed.My mind is dark, my inclinations perverse, and my soul is black.There’s no salvation for me until Amaya enters my life; a raven-haired beauty with blue eyes that sparkle like sapphires. She’s the epitome of what my life isn’t.I’m not worthy of her, and she certainly deserves better than me, but that’s never stopped me before.When I want something, I take it, and right now, I want her—and I won’t let anything or anyone prevent me from making her mine.About BLAIRE’S WORLD:This is a spin-off series of 7 Dark Romance titles, written by a collection of USA Today and Amazon Bestselling authors, deriving from Anita Gray’s Top 20 Amazon Bestselling, The Dark Romance Series. Each title in BLAIRE’S WORLD stands alone in the series and can be read in any order. BLAIRE’S WORLD titles include:BEAUTY, Part 1 & 2, by Kirsty DallasKRISTOFF by Measha StoneLUNA & ANDRES by Nikita Slater EVELINA by Ally VanceSERAFINA by Skye CallahanOLIVER by Anna EdwardsDEMETRIUS by Daniele RaeTo find out more, please visit www.anitagrayauthor.com
more
Amazon Other stores
Bookmark  Rate:

'Oliver: Blaire's World A Dark Romance' is tagged as:

All books by Anna Edwards  ❯