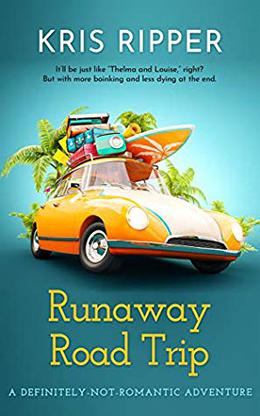 Just like Thelma and Louise, but with more boinking, and less dying at the end.

Bored freelancer Doc has lousy taste in men. The most recent example steals his computer and ties him to his bed, which is where his bestie Rowe finds him. An hour later Doc’s riding shotgun in Bertha-the-ancient-vehicle on the way to Los Angeles, where Rowe’s about to start his Real Life As An Actor.

Since life after Rowe leaves will be all diplomatic client emails and dying alone Doc could use a good distraction, and a spontaneous road trip down the coast is the perfect thing. Yes, technically he’s always had a little crush on Rowe, but it’s no big deal. Right up until Rowe kisses him and the world turns topsy turvy—in the best possible way.

When Rowe confesses he hasn’t been entirely honest, the betrayal sends Doc running. He doesn’t need more crappy guys in his life and dying alone is way better than being with someone he can’t trust. But losing Rowe is like losing a whole piece of his past and the best dreams he’s ever had for his future, and Doc’s not sure he can go back to boring after living something so much better.
more
Bookmark Rate Book
Amazon Other stores