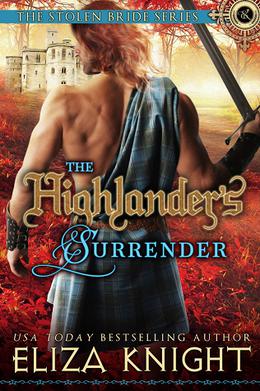 Eliza Knight's bestselling Scottish historical romance series, The Stolen Bride Series, is back with another amazing tale of adventure, passion and love!

Ceana Montgomery had notions of marrying for love after her first disastrous marriage ended in widowhood. But now Robert the Bruce has ordered her to marry a stranger in order to secure a strong alliance to end a decades old feud. Already used as a pawn once in marriage, she is devastated that she will once more have to give up her happiness in order to please the edicts of men. And while the braw, warrior standing before her may incite feelings inside her she thought long since buried, love is a far cry from desire.

The rivalry between Brochan Lamont and his brother John began in the womb, and only grew worse from there. Pitted against each other in childhood, their father left them with a legacy that was a race to the finish—whoever had an heir first inherited the lands. The only problem is Brochan has given his loyalty to the Scots, and his brother to the English. In order to keep the lands and ships under Scottish control, Robert the Bruce demands Brochan marry to break the iron-clad treatise. His new bride harbors a fiery temperament that lures Brochan into stoking her passions instead of her ire.

Aligned to settle a dispute and strengthen the Scottish claims on the realm, Brochan and Ceana must work together to overcome the obstacles that bind them. But perhaps seeing their duties through does not have to be as painful as they both predicted. Is it possible that love can be forged from a union born in alliance? Maybe Fate knew all along just who was meant for each other...
more
Amazon Other stores
Bookmark  Rate:

'The Highlander's Surrender' is tagged as:

Similar books to 'The Highlander's Surrender'

All books by Eliza Knight  ❯

Buy 'The Highlander's Surrender' from the following stores: