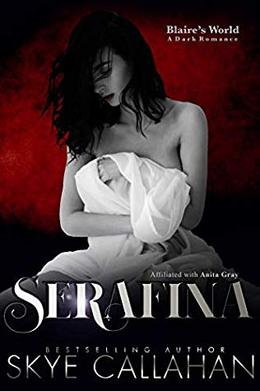 From Bestselling Author, Skye Callahan, comes a new Dark Romance that is part of BLAIRE’S WORLD. About SERAFINA:Seven years. Six hits. A hundred secrets. Syndicate leaders blackmailed. Wives and children set up to take the fall. A spy among the most dangerous of men. Sometimes seductress. Sometimes assassin.I'm the girl at the party everyone looks at, but no one remembers. I was trained to be ruthless, stripped of emotion and empathy, and yet something inside me, something logic and reason will never touch, yearns to be more than the beautiful facade crafted by my master. I want some part of the fantasy to be real. A touch. A kiss. A glance just for me. But none of it’s ever for me because there is no me. I am olvidado. Forgotten. Until I meet the one man who refuses to forget me.About BLAIRE’S WORLD:BLAIRE'S WORLD is a spin-off series of 7 Dark Romance titles, written by a collection of USA Today and Amazon Bestselling authors, deriving from Anita Gray’s Top 20 Amazon Bestselling, The Dark Romance Series. You do not need to read The Dark Romance Series in order to follow BLAIRE’S WORLD. Each story in BLAIRE’S WORLD is a standalone within the series, following the journey of a character from The Dark Romance Series, so expect to see some old faces—and some new ones.The BLAIRE’S WORLD Series can be read in any order. Anita Gray has had no creative influence over BLAIRE’S WORLD. The storylines are solely crafted by the authors. BLAIRE’S WORLD titles include:BEAUTY, Part 1 & 2, by Kirsty DallasKRISTOFF by Measha StoneLUNA & ANDRES by Nikita Slater EVELINA by Ally VanceSERAFINA by Skye CallahanOLIVER by Anna EdwardsDEMETRIUS by Daniele RaeTo find out more, please visit www.anitagrayauthor.com
more
Amazon Other stores
Bookmark  Rate:

'Serafina: Blaire's World' is tagged as: