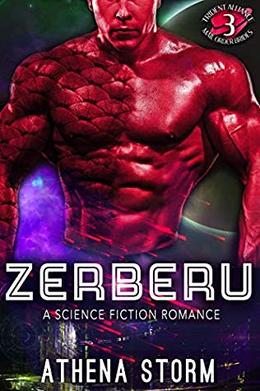 Vera Kronus has only choice after a long criminal career. Stay shackled and wait for her transport to a brutal prison planet or switch her ID and be sent to who knows where in the galaxy. She chooses the second option.

And wakes up on a planet where she’s the promised Companion to the most brilliant scientist in the Alliance. He’s been working on a new engine to bring parity against the Coalition. But his work life balance is suffering and his superiors determine that he needs a…Companion.

They thought they ordered the perfect mate. What they got instead was Vera - a human woman whose been sentenced for over twenty counts of grand larceny and fraud.

She has no idea how to cook food for an Alzhon. She has no idea about their customs. She’s sassy, independent, and fiery. With a figure that can send you into a supernova.

The sweet, caring, cosmically handsome and trusting Zerberu should be an easy mark then, right?

Because there’s one thing Vera never realized in her life of theft and crime.

That a quiet alien would steal her own heart.

Zerberu is the third book in the Trident Alliance Mail Order Bride science fiction romance series within the wider Athenaverse. It can be read as a standalone, but it still shares the same universe and situations you’ve found in other books. Each book features the romance of an alpha male alien warrior and a human woman who doesn’t put up with any nonsense. No cheating, no cliffhangers, and HEA guaranteed.
more
Amazon Other stores
Bookmark Rate Book

Buy 'Zerberu: A Science Fiction Romance' from the following stores: