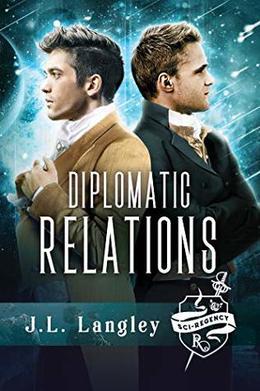 Dalton Fairfax, Lord Ashbourne, has always flaunted the rules of Regelence high society. Despite being the heir to the Marquess of Ravensburg and cousin to the Townsend princes, Dalton found his calling in the military, first in the Intergalactic Navy and now the Regelence Special Regiment. Finally home, in the same city as the parents he seeks to avoid along with a painful past, Dalton jumps at the chance to help his planet by taking on the role of bodyguard to the heir of the Duke of Eversleigh.

Blaise Thompson, Viscount Redding, strives to prove himself worthy of carrying on the Eversleigh legacy as the next Regelence IN council member. Maintaining his stellar reputation isn’t easy for Blaise, especially while keeping his outrageous younger brother in line and foiling his rival’s personal attacks. Ever conscious of living up to his responsibilities, Blaise has no time for romance, not even with a lusty special forces soldier.

But opposites don’t just attract… they sizzle. And when the only way to stop a scandal that threatens them both is to compromise their principles, Blaise and Dalton are forced to confront the risk of losing everything… even each other.
more
Bookmark Rate Book
Amazon Other stores

All books by J.L. Langley  ❯