Keeper of the Flame: Orrick (Second in Command #5) 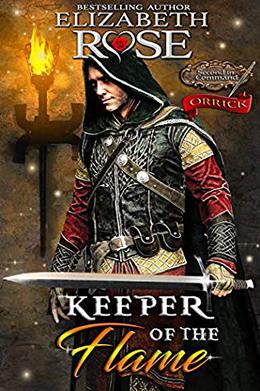 An old sorcerer is how everyone knows him, but Orrick Pendragon has only chosen to shapeshift into the image an old man because of his painful past. When he stole the Eternal Flame over a hundred years ago, he had no idea of the consequences of his action. Being immortal and also married, he had to watch as his loving wife grew old and died while he stayed young and continued to live forever. Heartbroken, he swore, he would never fall in love again. But when Lady Hope appears at his tower door seeking his assistance to find the Eternal Flame, he's intrigued and strangely attracted to her. Against his better judgment, he finds himself shapeshifting back into his young and handsome form of Sir Rick.

Lady Hope Threston arrives at Blake Castle as Lord Corbett's ward. However, it is only a ploy on her part to get what she wants. She's been betrothed to Lord Irwin, a blackhearted, greedy man. In order to convince him to break the betrothal, she agrees to help him find the Eternal Flame. However, she needs the assistance of the old sorcerer to do it. Lord Irwin wants to be powerful, invincible, and immortal, but all she wants is to be free. Then she meets the handsome Sir Rick and magically, everything changes.

Can an immortal man who is destined to live forever, find love again with a mortal woman who is bound to die?

The 'Second in Command' series

Similar books to 'Keeper of the Flame: Orrick'

More books like 'Keeper of the Flame: Orrick'   ❯

Buy 'Keeper of the Flame: Orrick' from the following stores: