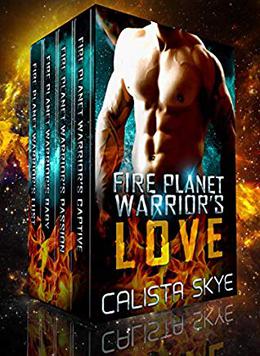 Harper is abducted by aliens.
Then she crashes into the deadliest planet in the universe. A planet that keeps getting consumed by an intense wildfire.
And then she's abducted again , by the largest and most gorgeous man she's ever seen: an angry Fire Planet Warrior called Vrax'ton.
If the planet is deadly, then this intense alien is downright lethal.
And he seems to think that Harper is his captive...

Harper is only the first of four Earth girls who are about to find their Fated Mates among the fierce, but intensely affectionate Fire Planet Warriors.

These are their stories, collected in one convenient volume.

Expect steamy scenes, funny lines, alien royals, lethal enemies and the barrier-breaking love between a girl from Earth and an alien barbarian who's convinced that he has finally found his Fated Mate.

This is the complete collection of the novels in the Fire Planet Warriors series.

It also includes the brand new and never before published short story Fire Planet Warrior's Love!
Princess Anabel’ia has returned to Acerex after a year at a college on Earth.
She has not found her Mahan among the Earthlings, but she has an idea about who her Fated Mate might be. How can she make sure?
The Fire Planet just might have the answer...

Save almost sixty percent of the price compared to buying each book separately!

What the Amazon reviewers say about these books:

'...a rollercoaster ride to stay ahead of the fire and not get killed by the planet...'
Amazon 5-star review

'...a delightful read that is a roller coaster ride. I can’t wait for the next in this series.'
Amazon 5-star review

'If I could give this book a higher number I would.'
Amazon 5-star review

You will love this collection of sizzling hot alien warrior romances because everybody enjoys a happy-ever-after ending!
Get it now.
more
Amazon Other stores
Bookmark  Rate:

'Fire Planet Warrior’s Love: The Complete Collection' is tagged as: