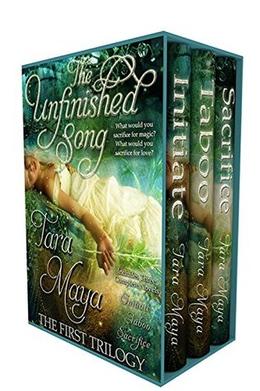 About THE UNFINISHED SONG Series

LONG AGO, to win a war, humans Cursed the Aelfae, fairest and wisest of the faeries…. But all magic has a price. The same Curse that destroyed the Aelfae now threatens all of Faearth. One young woman and the warrior she loves must fight the Curse to prove which is stronger…love or death.

DINDI desperately longs to become a Tavaedi, a magic dancer. But no one in her clan has ever passed the Test at Initiation. To violate the taboo, and dance without permission, is to risk death. The only other way to prove worthy is even more unthinkable: to bargain with the fae.

KAVIO is the half-human son of the Last Aelfae, exiled from his tribe. Refusing to be a pawn in his tribe’s struggles, his only goal is to find a new, peaceful life. But when he catches Dindi violating a taboo, he must choose between condemning her to death or helping her. Even if it means war.

THE FIRST THREE BOOKS OF A TWELVE BOOK SERIES.

How do you prefer to read The Unfinished Song? You can choose…