Isabel: A Mail Order Bride for Thomas (Christmas at the Edenwood Hotel #2) 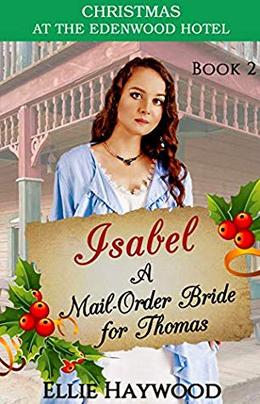 A new, sweet, clean, Christmas historical western Mail Order Brides series - Christmas at the Edenwood Hotel! You’ll meet and get to know the four Abernathy brothers who inherited their parent’s hotel. Each one finds himself on a special holiday Bride adventure! Join along with each of the brothers as their unexpected journey unfolds.

In this second book of the series, you'll get to know Thomas, the second eldest of the four brothers. He's always looking for something more. He had hoped his former sweetheart, Mabel, would fulfill his heart's desires, but he was devastated when he discovered she was also seeing another man behind his back. Now he's desperate and a little needy. He's certain his new mail-order bride, Isabel, will fill the hole in his heart and provide him with everything he wants, just like Rick's wife did.

But Isabel comes from high society back East and the only reason she has become a mail-order bride is a way of escape to avoid her unhappy home life as of late. However, she's having a difficult time adjusting to life out West... and neither she or Thomas is anything like the other had expected. The two struggle to connect and Thomas fears he has made a horrible mistake.

It is only when their relationship turns and begins to look quite hopeful, that visitors arrive in town and Thomas discovers that Isabel has not been completely truthful with him...

Will his hope be restored?
more
Amazon Other stores
Bookmark Rate Book

The 'Christmas at the Edenwood Hotel' series

Similar books to 'Isabel: A Mail Order Bride for Thomas'

All books by Ellie Haywood  ❯

Buy 'Isabel: A Mail Order Bride for Thomas' from the following stores: