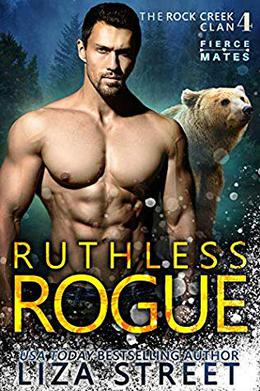 With an appetite like his, one night is never enough.

Faith is comfortable living a quiet life among her books. One wild night doesn’t define a person, especially when it’s based on a dare, or when it happens with a stranger she’ll never see again. But that was the past, and the guy is gone. She holds tight to the hot memories he left in his wake—and she tells herself those memories are enough.

It’s impossible for a shifter to forget his fated mate, but what happens when she doesn’t want to be found? Grizzly shifter Ian has been trying to track his one-night-stand for months. When he finds her, he realizes he’s not the only shifter interested in this captivating human woman. A rival shifter clan is sniffing around his mate, and there’s nothing Ian won’t do to keep her safe.

Ruthless Rogue is a steamy, fast-paced paranormal romance with a bookish heroine and a strong hero intent on claiming her. There’s a slight cliffhanger (more of a steep slope) teasing the next book, but Faith and Ian get their HEA.

If you’re a bibliophile and a fan of shapeshifter romance, one-click Ruthless Rogue and join Faith and Ian on the adventure of a lifetime!
more
Bookmark Rate Book
Amazon Other stores

All books by Liza Street  ❯