Lethal Balance (Sons of the Survivalist #2) 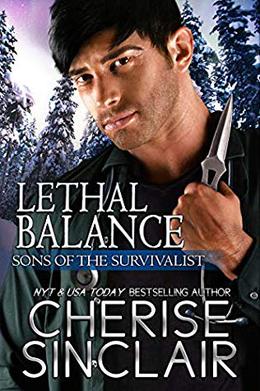 Once the best assassin in black ops, Cazador is now the best at saving lives.  His path has changed from seeking bloody vengeance to running a health clinic in Rescue, Alaska.

He will never again risk loving someone he can’t protect.

His mother and sister were murdered in front of him, his fiancée slaughtered in a war zone.  Despite his popularity with women, he’s determined to remain unattached. His heart can bear no more loss.

First, his brother hires JJ, a fiery-haired, tough cop who lives on the edge of danger and has the biggest heart of anyone he knows.  And then, his disreputable past returns in the shape of an adorable, foul-mouthed nine-year-old daughter.  Now he has two loved ones to protect. An impossible task, because…

Life is dangerous. Especially in Alaska.

Four boys that grew up hard and were finally rescued by a tough as nails, ex-military survivalist--and grew up into incredibly fascinating, yet broken in their own way men? Yes, please, and thank you!  ~ Dirty Girl Romance

The 'Sons of the Survivalist' series

Not a Hero
Not a Hero
(Sons of the Survivalist #1)