Tilly: A Mail Order Bride for Franklin (Christmas at the Edenwood Hotel #4) 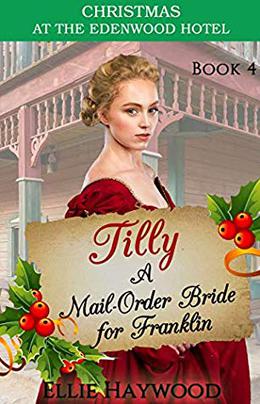 A new, sweet, clean, Christmas historical western Mail Order Brides series - Christmas at the Edenwood Hotel! You’ll meet and get to know the four Abernathy brothers who inherited their parent’s hotel. Each one finds himself on a special holiday Bride adventure! Join along with each of the brothers as their unexpected journey unfolds.

In this fourth and final book of the series, you'll get to know Franklin, the youngest of the four brothers. Franklin is a little on the shy side, preferring to spend his time in the barn caring for the guests' horses. But now that all three of his brothers are happily married, he's tired of feeling lonely and is ready for a wife.

When she arrives, however, Franklin finds that she's not as sweet as his brothers' wives were. She's strong-willed, independent and untrusting - all because of her background of having to live on the streets of New York. Still, despite her behavior, there's something about her he admires and he's desperate to prove to her that he's good enough.
But Franklin has other problems to deal with, too - there's a wild horse roaming the town and causing chaos at the hotel's stables.

It's only when he discovers that his new wife has been trying her best to impress him when a difficult circumstance arises...

Will this situation jeopardize any possibility of a Merry Christmas?

Find out by reading free with Kindle Unlimited!

The 'Christmas at the Edenwood Hotel' series

Similar books to 'Tilly: A Mail Order Bride for Franklin'

All books by Ellie Haywood  ❯

Buy 'Tilly: A Mail Order Bride for Franklin' from the following stores: