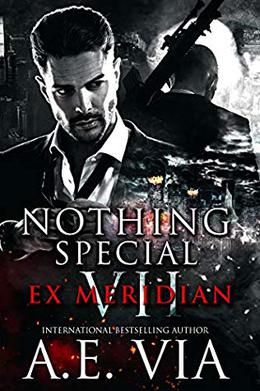 Police Lieutenants, God and Day are under intense pressure from the chief to take back control of Atlanta’s streets. The last thing their task force needs is a pair of trained killers in town with a personal score to settle.

Take a man and strip him of his ability to feel compassion, empathy, remorse, or any of the emotions that make him human, but leave the ones that ignite rage and aggression and you have the perfect killing machine—now imagine two of them.

Code names Ex and Meridian are synonymous for ‘guaranteed death’ to international terrorists. Two broken men from the same crooked streets, recruited into an unsanctioned government program that few know about. Trained to operate most efficiently—lethally—together.

When Ex returns from an op in Bolivia to learn his little brother has been accidentally killed in a feud between drug gangs, he’s stateside before he can consider the rules he’ll be breaking, and of course Meridian is right beside him. There’s mayhem on the streets of Atlanta and the police are losing control. If Godfrey and his elite team of detectives can’t get the job done then they’d be happy to lighten their caseloads for them. And Ex nor Meridian care about doing it quietly.

“I know who you are.” The man grunted when Ex turned to leave. “You’re the fucking devil.”
Meridian walked past, glaring one final time. “Say that loud enough… maybe God will save you.”

But after their first run-in with the big lieutenant and his protective husband, Day, Ex and Meridian start to reevaluate their own relationship. Wondering if they could be even deadlier if they let loose the feelings for each other that they’ve been forced to suppress for years.

Meridian’s dark eyes stayed locked on his, “A man who can fight beside the one he loves doesn’t make him weaker, Ex—it makes him more dangerous.”

No multiple pairings. No cliffhangers. Ends with a HEA.
Note: This is a partners-to-lovers, out-for-you, action romance.
more
Amazon Other stores
Bookmark  Rate:

'Nothing Special VII: EX Meridian' is tagged as:

Buy 'Nothing Special VII: EX Meridian' from the following stores: