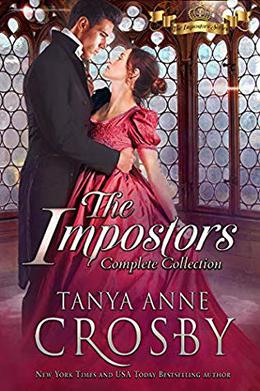 Never before together in one box set, the complete Impostor series—Seduced by a Prince, A Crown for a Lady and The Art of Kissing Beneath the Mistletoe…

Seduced by a Prince
Merrick Welbourne never anticipated discovering a long-lost twin—particularly one who'd rob him and leave him for dead on the road. Now living his brother's aristocratic life, he has new trials, tribulations... and temptations, not the least being Chloe Simon, a woman of rare mettle, proud heart, and unprecedented beauty. But she’s no easy mark for a perceived highwayman. Chloe Simon knew Lord Lindale was definitely not himself. After encountering the masked highwayman Hawk left for dead, he seemed... somehow different. Maybe more approachable? Infinitely more... desirable. Entirely too irresistible. In a stolen moment of startling intimacy, he makes her feel like titled nobility. But she was only ever a doctor's daughter, with every reason to steer clear of his very kissable lips.

A Crown for Lady
A deception of royal proportions thrust Ian MacEwen into the very center of the ton's marriage mart, forcing him to choose a bride who would be queen. All he wanted was to uncover the answers denied him from birth. Instead, he found saucy Claire Wentworth, a fearless woman with grass-green eyes who needs his protection—and his love—whether she knows it or not. Fallen from grace, danger stalks Claire Wentworth at every turn. She needs a champion, but what she gets instead is a royal mystery. The man all of London hails as "Prince" instead strikes her as a rogue adventurer—who no doubt rouses her slumbering heart to wide-awake desire.

The Art of Kissing Beneath the Mistletoe
Benjamin W. Wentworth III, the seventh Earl of Highbury, has been through his own travails. He nearly drove his family to ruin, and now, after spending weeks in debtor’s prison because of Alexandra's father, and coming shockingly close to losing his life and endangering his sweet sister, he realizes that all that glitters is simply not gold. The last thing he desires is to saddle himself with a woman like Alexandra Huntington, with whom he once shared a passion for the Season. Now, he’d rather choke himself with a silk cravat than endure an instant with someone so vain, so self-indulgent, so giddy and witless. He only wishes his sister would leave off with the holiday matchmaking—mustn't she realize how much he has changed?  When Lexie arrives to celebrate one final Christmas before his sister leaves for Meridian, it is all he can do to avoid the empty-headed chit. Unfortunately, his sister and her friends have festooned the entire house with mistletoe, and to make matters worse, Lexie is proving to be someone else entirely, and he’s about to remember the art of kissing beneath the mistletoe.

'The Impostors: Complete Collection' is tagged as:

Buy 'The Impostors: Complete Collection' from the following stores: