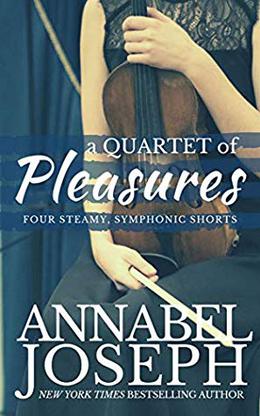 
Definitely Kinky : Ruby’s known the guys in her string quartet forever. There’s Jonathan, the bossy lead violinist, and Steve, the cellist, who plays ref when they’re at each other’s throats. Then there’s Ethan, the viola player. After five years, he’s still a mystery: quiet, unassuming, and intensely dedicated to the music they create. Who would’ve thought he’d be the one to step up and comfort her after a wedding reception gig goes haywire? Who would’ve thought they’d end up in each other’s arms?
And who would’ve thought he’d know how to tilt her world sideways using only his voice, his fingers, and a bundle of rope?


Perfect and Powerful : Sure, Ruby can’t stand lead violinist Jonathan most of the time, but she agrees to play his girlfriend at a party so he can fend off a stalker-ish fan. Only problem—over the course of the night, she discovers Jon’s an amazing dancer, and an even better kisser. When she’s in his arms, she forgets how much he irritates her, because he’s so passionate and forceful, so unapologetically in command.
He’s always a strict taskmaster during rehearsals and concerts, but maybe that translates into something more fun in the bedroom. With Ethan’s support and encouragement, Ruby decides to find out…


Play With Me : Steve’s the big brother type, always has been—tall, blond, fun-loving, faithful, and protective. When Ruby shows up on the wrong night for one of his famed pajama parties, he graciously invites her to stay and hang out. Everything’s great, until she gets a little too drunk on hard cider and professes her horniness for him. Repeatedly.
Well, the other two guys turned out to be fascinating learning experiences in the bedroom. Now Ruby and Steve have to decide if they want to cross that line too, or preserve their easy friendship.
Maybe, with a little luck, they can do both.


The Full Concerto : The good news: the Gold Quartet has been invited to play one of their favorite concertos as guest artists with the noted Berlin Philharmonic. The bad news: the concert falls on Ruby’s birthday, so she’ll be traveling to Europe with her fellow musicians instead of celebrating at home with family and friends.
The guys hatch a plan to make it up to her, a plan to celebrate Ruby’s birthday in a way she’ll never forget. Playing with one of the foremost orchestras in the world is cool, but fulfilling one of Ruby’s naughtiest fantasies is even better. Her three trusted friends and lovers take her on a ride of deep, passionate surrender, bringing this quartet of sensual stories to a spectacular close.
more
Bookmark Rate Book
Amazon Other stores

Buy 'A Quartet of Pleasures: Four Steamy, Symphonic Shorts' from the following stores: