I Buried a Witch (Bedknobs and Broomsticks #2) 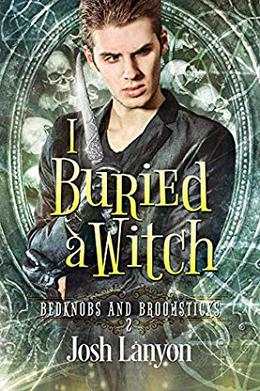 Cosmo Saville adores his new husband but his little white lies—and some very black magic—are about to bring their fairytale romance to an end. Someone is killing San Francisco's spellcasters—and the only person Cosmo can turn to—the man who so recently swore to love and cherish him—isn't taking his phone calls..

The only magic Police Commissioner John Joseph Galbraith believes in is true love. Discovering he’s married to a witch—a witch with something alarmingly like magical powers—is nearly as bad as discovering the man he loved tricked and deceived him. John shoulders the pain of betrayal and packs his bags. But when he learns Cosmo is in the crosshairs of a mysterious and murderous plot, he knows he must do everything in in his mortal power to protect him.

Till Death do them Part. With their relationship on the rocks, Cosmo and Commissioner Galbraith join forces to uncover the shadowy figure behind the deadly conspiracy…

Can the star-crossed couple bring down a killer before the dark threat extinguishes love’s flame?

I Buried a Witch is the second book in the smart and sexy Bedknobs and Broomsticks romantic gay mystery trilogy. If you like endearing characters, spell-binding conflict, and spooky, good fun, then you’ll love Josh Lanyon’s tale of a modern white knight and his slightly wicked witch.

Buy I Buried a Witch to lose yourself in the magic today!

'I Buried a Witch' is tagged as:

The 'Bedknobs and Broomsticks' series

Similar books to 'I Buried a Witch'

Buy 'I Buried a Witch' from the following stores: