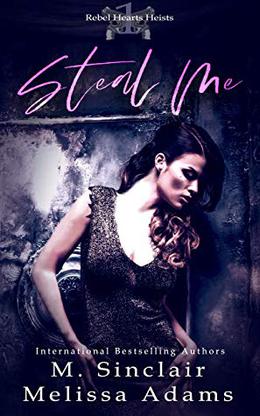 Sloane has been on the run from her emotionally abusive ex-fiancée for months. Now she finds herself attending college in California, in hopes that her FBI agent ex won't be able to locate her. She's done her best to stay away from everyone, trying not to get attached in case she has to disappear again.

...Because Sloane would die rather than let Pierce lay another finger on her.
To support herself she works as a teller at a local bank and on an ordinary day at work, her life will change forever when she gets kidnapped at gunpoint by four masked bank robbers.

But what happens when she realizes that she knows those four men from college? Suddenly, Sloane fears for her life because she’s now a liability, bound to get them identified and caught. Especially when Pierce catches up with them and a wild chase across three states begins.

But things get complicated when her kidnappers turn into her protectors... when Sloane can’t help but feel safe with the brothers Royce and Blaine, with the intense and gorgeous Kaden and even with dangerous and crazy River.

Their futures, their hearts, and their lives hang in the balance when she realizes that each man was robbing banks for a reason.

Similar books to 'Steal Me'

Buy 'Steal Me' from the following stores: