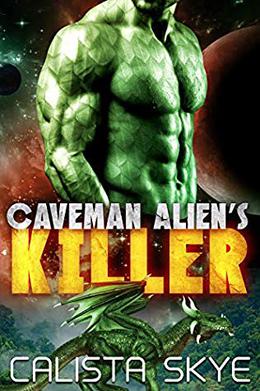 Eleanor
There are two dead cavemen on the ground.
Standing over them is a dragon, his clawed hands dripping with their blood.
He's in his human form, but he still scares me stiff. He's huge and metallic green, and he has two rows of dagger-like spikes down his back.
The cavemen were supposed to be my escort through this alien jungle, but this dragon is obviously much more deadly than the many dinosaurs ever were.
His smile freezes my blood, and his blue eyes are as intense as welding flames
But I mostly notice the twitching bulge in his leathery pants. He clearly has plans with me.
And I'm not sure he cares what I think about those...

Aragadon
The little female trembles, and I can't help but smile. I did not expect to find someone like that on this planet. She's clearly an inferior being, but she's round and small and delectable.
My crotch swells at the sight of her. She might provide me with some entertainment on this desolate planet before I Change back to my dragon form and kill all the living beings I can find.

Caveman Alien's Killer is the eleventh book in the Caveman Aliens series of science fiction romance novels. The books are complete stories, but should be read in order for maximum enjoyment.

Expect steamy scenes, mysterious aliens with features like adult toys, deadly planets and the love story between a girl from Earth and a sensationally hot and deadly alien dragon.

'Caveman Alien's Killer' is tagged as: