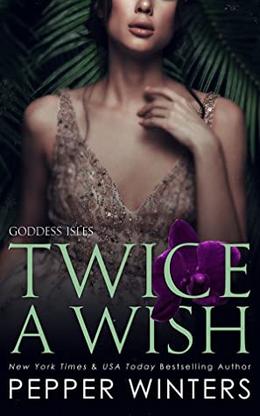 “There was a monster once. A monster who bought me, controlled me, and took away my freedom.
There was a man once. A man who dealt in myth and secrets, hiding behind his mask, making me hunger and wish to know the truth.”

Eleanor Grace belongs to the man and the monster, hating them both but unable to deny that something links them. Something she doesn’t want to feel, something that traps her as surely as the sea surrounding the island where she serves.

Sully Sinclair belongs to his past and the black and white script his life has become. He views his goddesses as commodities—possessions to be treated kindly but firmly. The only problem is…Eleanor is different.

She’s jinxed him.
Cursed him.
Awakened him.
She’s a goddess with the power to ruin him.
more
Amazon Other stores
Bookmark  Rate:

'Twice a Wish' is tagged as:

Similar books to 'Twice a Wish'

All books by Pepper Winters  ❯

Buy 'Twice a Wish' from the following stores: