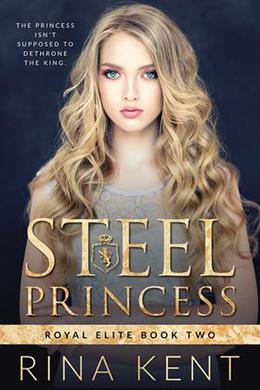 The princess isn’t supposed to dethrone the king.

Elsa
He said he’ll destroy me, and he did.
I might have lost the battle, but the war is far from over.
They say it starts with one move to dethrone the king.
No one mentioned he’ll yank me with him on the way down.

Aiden
If Steel’s little princess wants a war, then war it is.
There’s only one rule: my rules or none at all.
By all means, show me what you got, sweetheart.

Steel Princess is book two of Royal Elite series and should be read after Deviant King. This is a dark high school bully romance, mature new adult, and contains dubious situations that some readers might find offensive.

This book is part of a trilogy and is NOT standalone.
The entire trilogy is available
more
Bookmark Rate Book
Amazon Other stores

All books by Rina Kent  ❯