Under the Needle's Eye 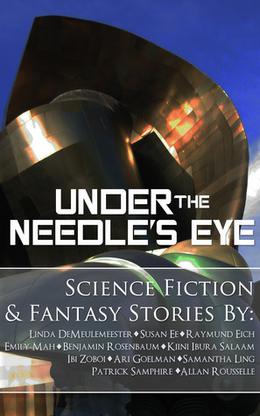 Eleven authors with one thing in common, we were in the Clarion West Workshop for Science Fiction and Fantasy class of 2001. Other than that, we're about as diverse as you can get. This anthology is one of the broadest samples you can find of up and coming science fiction and fantasy talent. Included are:

Ibi Zoboi - both a writer and storyteller of the oral tradition, has won "Tricky Talker of the Year", granted by the Afrikan Folk Heritage Circle, and is a recipient of grants from the Brooklyn Arts Council and the Speculative Literature Foundation (Gulliver Travel Award)

Kiini Ibura Salaam - is about to release the collection, Ancient, Ancient, from Aqueduct Press and is a former Thomas J. Watson fellow

Benjamin Rosenbaum - nominated for a Nebula for the first story he wrote at Clarion West, also a finalist for the Hugo and Theodore Sturgeon Awards

Ari Goelman - will have his first novel, The Path of Names, released by Adam Levine in 2013

Susan Ee - the first indie author to be a finalist for the Cybils Awards, for her novel, Angelfall

Linda DeMeulemeester - author of the award winning, hit series, Grim Hill, which is now in development as an animated television show

'Under the Needle's Eye' is tagged as:

Similar books to 'Under the Needle's Eye'

Buy 'Under the Needle's Eye' from the following stores: