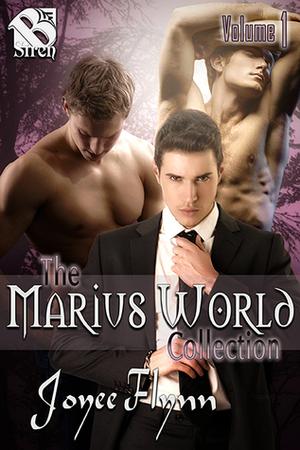 In Maverick Danker, Maverick worries he will never find his mates. Tyler has given up on love. Asterio must face the insecurities that a few hundred years’ dry spell brings on. Will Mav, Tyler, and Asterio fight to overcome the obstacles on their road to love? Or will they each choose the path of least resistance—and ultimately end up alone? In Ferris Braden, Ferris, Rylan, and Onah feel as if fate knew what she was doing when matching them up. But when tragedy of epic proportions strikes, can the brand-new mates stick together when they haven’t even had a chance to claim one another? In A Very Marius Christmas, is it just the holiday blues or is every mated couple having issues? With the constant stress from the attacks the coven faces, all the changes over the past few years, and no mating being perfect… All the brothers need help to rediscover happiness with their mates. But who can help when it’s way past time for simple apologies? In Gabriel, Gabriel has been waiting six months to claim his mate. He will stop at nothing to convince Caven he sees him as the man he fell in love with and not an annoying teenager he’s stuck with for a mate. But will it be enough? In A Brio Grinder, Brio has no idea that when Queen Magdalena tells him he’s going through the portal to Ireland his life will be changed forever. The aftermath of a battle doesn’t throw him but what does is the two gorgeous men, one badly injured. Brio jumps in to help, only to find out both men are his mates.
more
Amazon Other stores
Bookmark Rate Book

Buy 'The Marius World Collection, Volume 1' from the following stores: