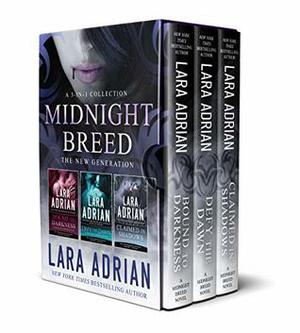 "Enter Lara Adrian's vampire world and be enchanted." --J. R. Ward
"One of the best vampire series on the market!" --RT Book Reviews

BOUND TO DARKNESS
Daywalker Carys risks her heart--and her immortal life--when she falls for cage-fighting vampire Rune. When the bodies buried in his past rise up to threaten his present, Rune must choose between betraying Carys's trust or putting her in the crosshairs of a battle neither of them can hope to win on their own.

DEFY THE DAWN
Born of different worlds. Bound by a desire they cannot deny. Immortal warrior Zael meets his match in Brynne, the strong, mysterious Breed beauty who's never dared to risk opening her heart to anyone--least of all a handsome immortal from a world on the verge of war against hers. Thrust together in a fight against a diabolical enemy, Zael and Brynne embark on a mission that will ultimately force them to decide between duty to their people, and a passion that defies all bounds.

CLAIMED IN SHADOWS
Vampire warrior Aric must decide between duty and desire when he falls for beautiful Kaya, a fiery trainee who gives as good as she gets. When Kaya's past reaches out from the shadows to call her back, she must decide between protecting a dark alliance that could shatter her dreams of joining the team and a truth that could not only forfeit Aric's faith in her, but bring the enemy right to the Order's door.

Look for the next book in the series, BREAK THE DAY, coming Summer 2019!