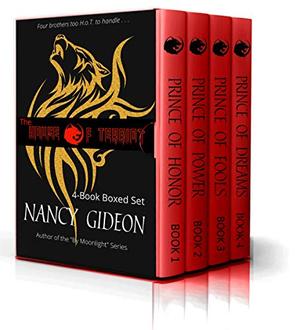 PRINCE OF HONOR
Turow . . . Strong, silent man of integrity returning a traitor to face the judgment their clan. On the run with the bad girl he’s loved forever, the choice between duty and desire has never been more difficult . . . or deadly. Could the bargain made to save their lives become reality?

PRINCE OF POWER
Colin . . . The Prince of Nail and Bail finds himself negotiating a truce for his clan with the only woman to ever walk away from him. Strong, loyal . . . and obsessed with an enemy he’s determined to make his own, even if having her means losing all.

PRINCE OF FOOLS
Rico . . . Reckless, big-hearted hothead torn between his desire for the female who belongs to his brother and the woman he needs who’s tied to the child of another. The only way to protect their future happiness is to deny his own.

PRINCE OF DREAMS
Kip . . .Youngest of the Twelve, using brain not brawn to help his clan, until a voluptuous palm reader casts a very different future – twisting innocent attraction into dangerous deception when he’s forced to use her to destroy her father.
more
Amazon Other stores
Bookmark  Rate:

'House of Terriot' is tagged as:

Similar books to 'House of Terriot'

Buy 'House of Terriot' from the following stores: