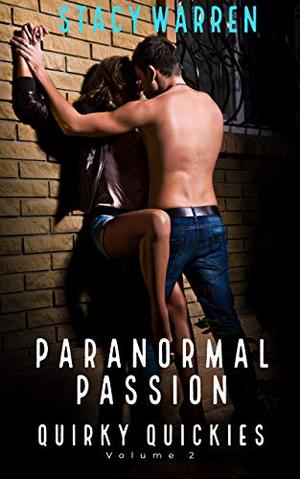 *Red Room Rendezvous – Hunter awoke naked in a strange place with a headache and no memories of the night before. Amanda a gorgeous redhead appeared and made him feel better in all the right ways.

*Extraterrestrial Tongue – Celeste was walking in the park when there was a bright blue flash of light. Somehow she ended up on a cold exam table which lead to the most extraordinary and sensual alien abduction.

*Halloween Hi Jinks – Witches, vampires, ghosts, and zombies, are they just costumes or are they real? Hayley and her friends rock the party and win the costume contest. Hayley casts a spell on an unsuspecting zombie, but as it turned out, she was really under his spell.

* ‘Were’ Me Out – Cynthia was on a romantic walk with her boyfriend when they are confronted by a scary creature. Her werewolf boyfriend saves the day then fiercely ravages her with unbridled ecstasy.

*Tempestuous Time Travel – Felicia had struck out in her last few relationships, so her friend convinced her to give a certain toy a try. Embarrassed to even be in the store, she was in for an even bigger shock when she returned home and tried it out.

*Fangtastic Fantasy – Sir Felix Fuchs was ‘living’ a lonely existence pining for his longtime partner. Out for nourishment, he was pleasantly surprised, when she appeared before him and filled his evening with desire.

*Out of This World – Zost was fed up with the mundane everyday life he had. Ready for a change, he contemplated a new career. His loving partner had a better idea, why not spice up their intimacy with an outsider who they could both lavish attention upon?

**Gushing – Digging out some weeds in the garden, Danielle found a buried treasure. Curiosity got the better of her and while cleaning it up a sex genie appeared stating he couldn’t return until he granted her three wishes fulfilling her wildest desires.
more
Amazon Other stores
Bookmark  Rate:

All books by Stacy Warren  ❯