Healing of the Wolf (The Wild Hunt Legacy #5) 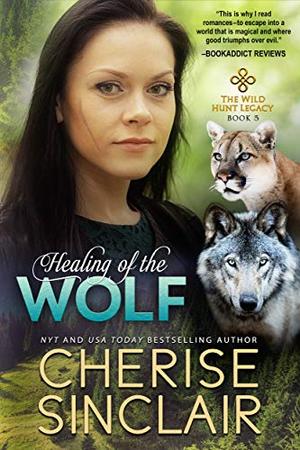 A decade in captivity tore away all hope.

But Margery never lost her resolve to help the sick. The village she’d hoped to serve as banfasa, caring for the ill and injured, is long gone. Humans captured the young shifters and killed the adults. Finally rescued, she has a chance at her dreams—at least for meaningful work. With her leg crippled and her face scarred, she knows she has no hope of ever finding love.

Tynan is ready to find their mate.

After years away from his littermate as a police officer among humans, Tynan is finally home, a beta in the wolf pack, and serving his people as a law officer. Assigned as Margery’s mentor in the pack, he patiently works to earn the skittish little wolf’s trust. Her captivity has left her with problems, including a fear of uniforms. But he’s a fixer at heart—and he’s starting to want more from the gentle female than just friendship.

Donal has no intention of making a family.

Separated from his littermate for years, Donal has remained unmated, devoting his energies to healing. Believing ugly rumors about their new neighbor—a banfasa—he won't have her in his clinic or his life—no matter what his newly returned brother wants.

But a feral shifter’s attack on Tynan shows Margery in a whole different light. She’s levelheaded, compassionate, sweet—and far too appealing. What male could resist her?

But even as the brothers work to win their mate, cruel forces move to crush their entire clan.
more
Amazon Other stores
Bookmark  Rate:

'Healing of the Wolf' is tagged as:

The 'The Wild Hunt Legacy' series

Similar books to 'Healing of the Wolf'

Buy 'Healing of the Wolf' from the following stores: