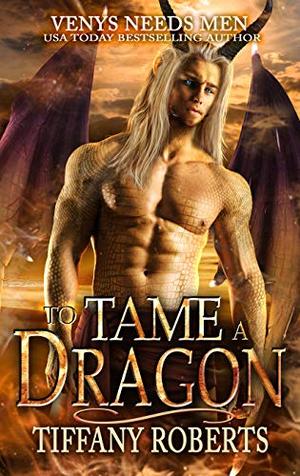 Claiming a dragon is as easy as a single touch, but claiming his heart is another matter entirely.

The tribes have been dying beneath the desert sun for as long as they can remember. With fewer and fewer males birthed, there is little hope of survival. Humanity is doomed.

The yearly blooming is a season of fertility and new life—and the time when the males choose new brides. But Elliya has no desire to become another wife amongst many to a spoiled man. She longs for more. She longs for love.

When the Red Star appears in the sky on the night she is to be chosen, Elliya knows it is her chance to make her own choice. She ventures out beneath the blood moon to prove the old legends true—to claim a dragon as her mate. But even if she can forge the legendary bond with her dragon, can she win the most important prize of all?

'To Tame a Dragon (Venys Needs Men)' is tagged as:

Similar books to 'To Tame a Dragon (Venys Needs Men)'

Buy 'To Tame a Dragon (Venys Needs Men)' from the following stores: